This week I watched the Alfred Hitchcock movie I Confess so I could analyze and write about it for my alfredhitchblog site.  I hadn’t seen it for many years, and I was watching it with a particular eye for the religious symbolism.  It is a better movie than I remembered it, but far from Hitchcock’s best.  For a detailed look at this movie, look here. 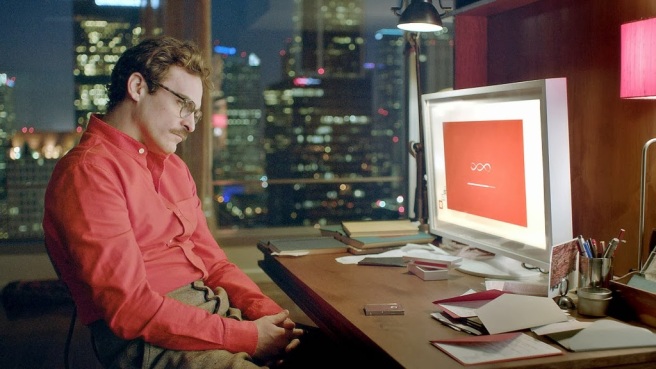 Next I watched the Spike Jonze movie Her.   This was one of my two favorite movies of 2013. My son Kevin and I see all of the Oscar-nominated movies every year, and we both really enjoyed this one.  I was very happy when Spike Jonze won the Academy Award for best original screenplay for this movie (happy for Jonze because I thought he deserved it, and happy for me because I picked him to win in my Oscar predictions).

I like futuristic movies that are set in the near-future, as opposed to hundreds or thousands of years hence.  This movie is not some fabulist’s tale of bizarre unfamiliar machines, but a future that is palpably close, and therefore much more real.  The set design, costume design, and cinematography all work together to form a very believable aesthetic.

Will people ever fall in love with operating systems?  It would not surprise me;  the Japanese are already working on very life-like robots that will provide unconditional love and emotional support for people who live alone and feel alone.   Now whether those operating systems could ever achieve a state of self-awareness, and act autonomously, is another question entirely, with the answer farther away from us. 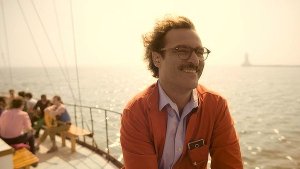 The performances are good (particularly Joaquin Phoenix, Amy Adams and the voice of Scarlett Johansson) the visual look is unique, and the screenplay is great.  The screenplay covers a wide range of emotion, not least of which is humor;  there are a few laugh-out-loud moments in this film.  This is one of those movies which makes me feel good about being alive, on this world, at this moment.

It was a pretty natural progression to go from Her to Minority Report.  After all, it is another movie set in the not-too-distant future, although the premise is not believable.  This was about the time that Steven Spielberg began to explore different genres and themes than he had for most of his career.   There are times when Spielberg seems to play it safe, to coast, but there are certainly times when he has taken chances, and many times they have paid off. 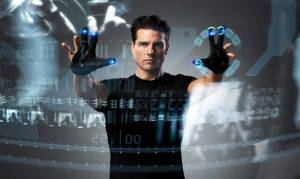 This movie is based on a short story by Philip K. Dick.  I purchased a collection of his short stories many years ago, but had never opened it.  I figured it was about time, so I read the story this week, after re-watching the film.  The basic premise of the movie exists in the story, but honestly, the short story is weaker than the screenplay.

About that screenplay.   Overall, it is very good.  There are a few moments that don’t quite ring true to me.   (I mean true within the confines of the story.  Of course the very premise of “precogs” who can see crimes before they happen is ridiculous;  but once the premise is established, the story must follow its own logic.)  It’s actually a very engaging premise.  Isn’t there a fundamental paradox in arresting somebody for a crime they have not yet committed?

Visually, the movie works very well.  Spielberg used a “bleach bypass” on most of the film, giving it a washed look, drained of most color.  One exception is the color red, which is used as a color cue.  Many directors have used red as a color cue (Hitchcock, Kurosawa, Spielberg himself), and it works well here.  Next time you see this movie, watch for scenes with red in them.  They happen when the character of Danny Witwer (played by Colin Farrell) is on-screen.  This is foreshadowing; in his final scene the color red has a very strong significance.

Tom Cruise was just reaching the peak of his power at this point, and is very well cast in the lead role.  Max von Sydow, alas, has played so many villains over the last 20 years that the audience becomes immediately suspicious of him.   Samantha Morton is very good in the difficult role of the “precog”,  one of the three people who see the future crimes.   Peter Stormare and Tim Blake Nelson are memorable in small supporting roles.  Their characters give the movie the feel of an old film noir, in the vein of The Maltese Falcon or The Big Sleep, which have a bizarre cast of memorable supporting characters. 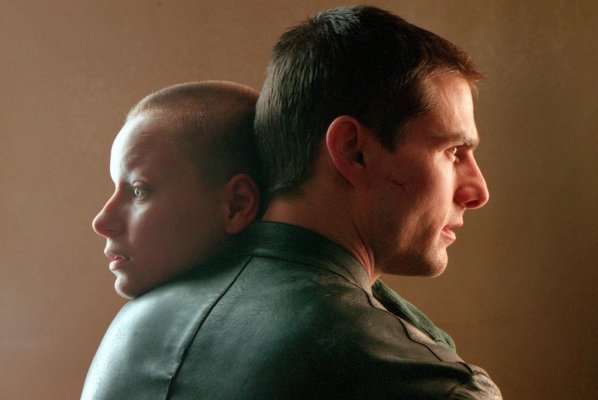 This material definitely inspired Spielberg to up his game visually, with several memorable shots, including the one seen above.  There are also a couple of deliberate nods to Alfred Hitchcock (one involving umbrellas), and a fantastic overhead sequence in a tenement building.  Overall, this movie succeeds.  If you don’t pause to question the logic of what is happening, and just go along for the ride, it is a very entertaining movie.

Speaking of not pausing to question story logic, we get to Captain America:  Civil War.

Nobody is more surprised than me that I saw this movie.  But my car was being serviced and I had some time to kill.  A few years ago, I declared a moratorium on comic book movies.  I just decided that I wanted a break.  I did see all of the Nolan Batman movies  I saw the first Iron Man.  I saw the second Captain America movie because my son and I were in London, and the movie premiered over there earlier than in the States, and he wanted to be able to scoop his friends and see it first.  I saw the first Avengers.   And that’s it.  So I’m missing a few pieces of the puzzle.  It’s not that I dislike the movies.  And it’s not that I’m highbrow or something like that, and frown on these types of movies.  I just got a little tired of the constant reinvention/rebooting of franchises. 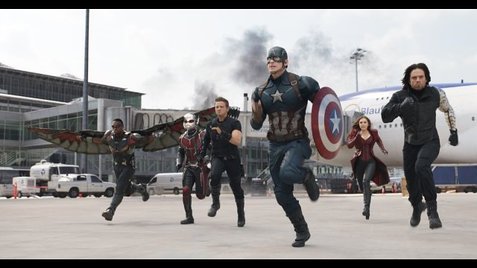 That being said, this Marvel franchise has done it right.  They had a long-term plan, and it has paid off immensely.  So maybe I’m going to have to watch the movies I missed, to fill in the blank.  This movie is exactly what you want it to be, just a pure popcorn movie.   The premise of characters that the audience all love facing off against each other is a good one.  The problem, of course, is that we know ultimately that none of them will die, and that they will be reunited, so that takes a little of the suspense away.  That being said, it is a good movie.  It did feel like it had about 3 endings.  Couldn’t it have ended with a cliffhanger?   Leave some of the Avengers in prison, and open the next movie with their escape?  Apparently not, everything has to resolve itself.    Performances?  Well, everyone is playing characters that have already been established in earlier films, so they are all comfortable and enjoyable to watch.

I liked this movie enough  that I will go back and see some of the movies I missed along the way.  At least the Marvel ones.  I will never watch Batman v Superman..

One thought on “I Confess, Her, Minority Report, Captain America: Civil War”